When I Can’t Sing was put out of its misery at the London Palladium and We Will Rock You ended its 12-year residency at the Dominion, two of London’s five largest theatres went dark at the same time for the first time in decades.

With Cameron Mackintosh having recently brought Miss Saigon back after a 15-year absence (opening to record advance box office at the Prince Edward last month), Andrew Lloyd Webber has brought two of his old productions back to the West End. 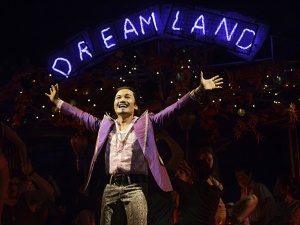 Cats will take up a residency for 12 weeks at the cavernous Palladium from December, with tickets going on sale on 7 July.

Cats originally ran for exactly 21 years,, from May 1981 until 2002, chalking up 8,949 peformances at the New London Theatre, now home to Warhorse.

Evita will land at the Dominion for a short 55-performance run from September with Wet Wet Wet’s Marti Pellow and Madalena Alberto. Tickets are now on sale.

Evita premiered in 1978 at the Prince Edward starring Elaine Page as Eva Peron and ran for nearly eight years.

Speculation is rife as to the longer-term residents of both venues, with rumours of Disney’s Aladdin going to the Palladium in 2015/6 and Back To The Future landing at the Dominion in 2015.