As the music festival season gets into full swing, Showbusinessinsights examines the economic impact the festivals have. Music fans travelling to rural locations bring chaos to the local area, but also spend substantial amounts of money.

Festival organisers are keen to make the case that a substantial amount of that money benefits the local community economically, rather than simply being siphoned off into rock stars’ bank accounts.

When a new festival launches, locals may be concerned about a negative effect, not least in terms of crime. According to Countryfile Magazine, ‘when the Latitude Festival was launched at Henham Park, near Southwold, Suffolk, locals like Rosemary Parry braced themselves for an influx of festival-goers. “We had no idea the festival would be as successful as it is, so naturally there were concerns,” she says. “It’s a sleepy village so there was a lot of prejudice towards all these young people coming here, but I’ve never known any trouble.”

The daddy of UK festivals is Glastonbury, which attracts around 200,000 visitors in one weekend (making it a larger city than Peterborough, temporarily). \

Countryfile interviewed Dan Mountain of Somerset and Avon Constabulary, who stated: “When close to 200,000 people descend on a quiet village like Pilton, it obviously has an impact. During the festival we have a 24-hour office for residents and a neighbourhood policing team.” Reported incidents in the village are down to single figures.

As fears of increased crime prove to be wide of the mark, the impact on the local community is economically positive, particularly for those events whose organisers seek out local merchants as suppliers. 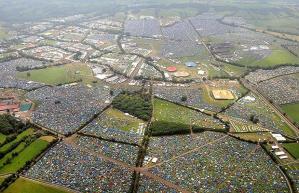 A study (by Mendip District Council and the festival organisers) of the economic impact of Glastonbury in 2007 estimated the benefit at £35 million.

£400,000 was spent on accommodation in Shepton Mallet, Glastonbury and other local villages. Local petrol stations benefitted from the 40,000 visiting vehicles. Local businesses provide services such as Fly Glastonbury, run by Mark Edgerly, operating a helicopter service for bands and super-rich visitors.

The Isle of Wight Festival is estimated by the local authorities to generate a £10-15 million benefit to the local economy. The Ferry companies alone will see increased fill rates around festival time. 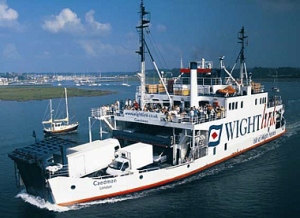 Ferry to the Festival

At the other end of the scale is Glyndebourne, a feature of the English ‘Season’, alongside the Cartier Polo, Chelsea Flower Show, Ascot and Henley Regatta. A mostly London and Home Counties set descend on the purpose built opera house in the grounds of Glyndebourne, near Lewes in East Sussex, to enjoy champagne picnics in dinner jackets at least as much as the world class opera on offer.

Glyndebourne is keen to emphasise its social responsibility agenda. Its 67 metre-tall wind turbine generates 102% of the required annual electricity, meaning that the festival is a net-contributor to local energy requirements.

The one unarguable issue with any festival will be the impact on local traffic. Inconvenienced locals will simply have to focus on the economic benefit while fuming in their cars.

2 thoughts on “Economic impact of festivals – from Glastonbury to Glyndebourne”