Extraordinary breaking news as the megabucks US arena tour of Jesus Christ Superstar was cancelled amid confusion and shock.The production was due to open in New Orleans on 9 June and was scheduled to play arenas across the US over the next two months before ending in Philadelphia on 17 August. With a 50 date tour, more than half a million tickets were available, with a potential gross in the tens of millions of dollars. 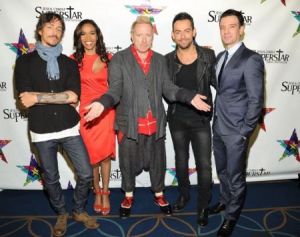 The smash hit musical, written in 1970 by Lord Andrew Lloyd Webber and Sir Tim Rice, successfully toured the UK as an Arena Tour starting in 2012, following a prime time TV casting show to search for the new Jesus, a contest eventually won by Ben Foster. Foster was lined up to play Jesus on the American tour. The UK tour featured Tim Minchin as Judas, Mel C as Mary Magdalen and Chris Moyles as Herod.

Details of why the tour has been pulled are sketchy but reports suggest that one of the backers of the tour pulled out at the last minute. What is clear is that the cast and crew will now be looking for work.
According to reports on social media, the cast were told during a runthrough on 30 May. Ben Foster commented on Facebook: “I am so devastated. I’m sorry to everyone who got tickets and flights..Who ever f*cked it up I hate u . But ?#‎IforgiveU? ?#‎imjesus?..wellwas x”.

JC Chasez tweeted: “When it rains it pours”.

Brandon Boyd (@mybrandonboyd) tweeted: “I got fired from #JesusChristSuperstar today….but so did the rest of the cast so we’re all sad together. Yeah, it’s true. Tour cancelled”

Ticket holders will be able to refund their tickets, but presumably will not be compensated for any incidental costs incurred, such as flights or hotel bookings.

The tour’s website has been amended to remove all reference to the tour, but leaving a flippant pun, liable to infuriate those who have lost their jobs or bought tickets for the show: “Everything’s alright, yes, everything’s fine. …and we want you to sleep well tonight, but it looks like that page has moved!”

The official statement is light on detail:

“Options Clause Entertainment LLC, an affiliate of S2BN Entertainment, announced today the cancellation of the Jesus Christ Superstar Arena Spectacular Tour including the previously announced show on Tuesday, August 5, 2014 at Madison Square Garden. All purchased tickets will be refunded. Tickets purchased online and via telephone will be automatically refunded. Tickets purchased from outlets/venue box office must be returned to that location for refund.”

As more details emerge, showbusinessinsights will keep you informed.