As a fan of live entertainment as well as a businessperson, I have long been conflicted by the economics of show business. Take asset utilisation, for example. How can we be surprised at the lack of profitability in an industry where hugely expensive assets like stadiums and theatres lie idle most of the time – in some instances, more than 98% of the time?

For showbusinessinsights of asset utilisation of varying live entertainment venues, such as as stadiums, cinemas, concert venues and theatres, click here.

So in the Christmas spirit, it’s time to praise one show business phenomenon that lights the way to sweating your economic assets: the Radio City Christmas Spectacular. 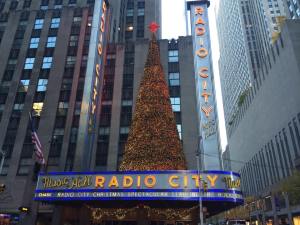 Staged at the magnificent 5,933 seat Radio City Music Hall since 1932, it is as much a part of Christmas in New York as shopping and fighting over cabs. It is also the New York equivalent of the British tradition of seeing a pantomime. But whereas British pantomimes follow (broadly speaking) theatrical convention, with eight performances a week, the Christmas Spectacular is more ruthlessly commercial in its approach.

Unlike in the theatre, there is no day off: the Rockettes appear daily. The schedule is punishing. From Monday to Thursday, there are four performances a day. Yes: four. 11am, 2pm, 5pm and 8pm. As if that wasn’t enough, the pace picks up at the weekend. Fridays see five shows: 10am, 1pm, 4pm, 7pm and 930pm. Saturdays are the weekly peak, with an incredible six shows, starting at 9am, with the last performance literally (high) kicking off at 10pm. There is a market for nearly 6,000 people to be seated at 9am to watch a Christmas dance spectacle. Sunday reverts to Friday’s five show schedule. So much for the day of rest! 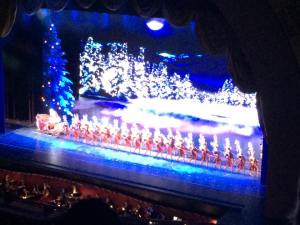 Compare that to Broadway or West End shows, where the venue is used a paltry 8 times. If a typical Broadway show is 2h 30 long and we assume 30 minutes utilisation of the venue for pre-show drinks and time needed to enter and exit the venue, then a theatre is used 8 x 3 hours a week, or around 14% of the week.

The Rockettes performance lasts 90 minutes, so with the same 30 minute add-on, we get to 32 x 2 hours = 64 hours a week. This equates to 38% of the week – nearly three times the utilisation of a theatre. Now that’s the sort of economics that would get even Ebeneezer Scrooge excited, not to mention Santa!

And let’s remind ourselves of the scale of the venue: Radio City Music Hall seats 5,933. Thats more than the two largest theatres on Broadway or the West End combined. With premium ticket prices: the cheapest seats (in the nose-bleed-inducing top balcony) starting at over $50, going up to well over $200 in the Orchestra for peak shows.

The incredible and iconic cannon sequence

And the money-making machine doesn’t even stop for Christmas: there are three shows on Christmas Day – 1pm, 4pm and 7pm, with the 4pm show hitting the highest ticket price of $250 a seat for Orchestra seats.

The Christmas Spectacular is a money-making juggernaut. In a three month season, approximately 1.2 million tickets are sold in approximately 200 performances. That means on peak days, 35,598 seats are available. This number is approximately equivalent to all the seats on Broadway or in the West End. The season grosses, according to the New York Times, roughly $74 million.

Pleasing to the economist as well: the sponsorship tie in with Chase. The whole event is sponsored, reasonably discreetly, by Chase bank. They also sponsor free Santa hats at selected early season shows, presumably to drive traffic before the Holiday Season really kicks off.

The season is highly lucrative for the Rockettes themselves: Dancers are paid in the order of $135 a show, according to the New York Times. But with three shows a day mid-week, that soon adds up. Overtime kicks in for the third show, so with weekends bringing four, five or even six performances, that overtime effect can really bolster the dancers’ pay packets. The performers also benefit from year-round health insurance. Membership of the Rockettes is a very attractive proposition for a dancer as there is a high return rate, with many dancing every Christmas for years until retiring in their mid-thirties.

So while the Rockettes sweat their assets, Radio City Music Hall is sweating its asset. Even Ebeneezer would drink to that!

Videos – as credited on Yutube